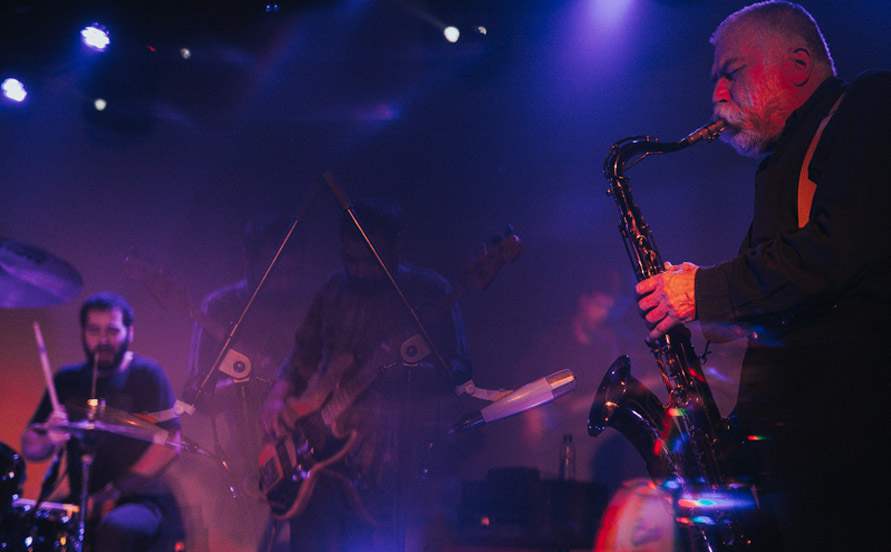 This is a meeting written in the psychedelic sky. Everything seemed to announce it on the paths of the Portuguese stoner rock band Black Bombaim and of the German free jazz saxophonist Peter Brotzmann. The trio used to combine a saxophone to their music, usually choosing Rodrigo Amado, a first line figure of the jazz scene in Portugal, and also the late Steve Mackay, the tenor we hear on the pioneering (in what concerns this kind of mixtures) “L.A. Blues”, by Iggy Pop &The Stooges.
Brotzmann had multiple experiences in the proximities of rock, from the group Last Exit, with Sonny Sharrock, Bill Laswell and Ronald Shannon Jackson, to Full Blast, in the company of Marino Pliakas and Michael Wertmuller, going through his partnerships with his son Caspar Brotzmann and with Fushitsusha, the band lead by Keiji Haino. The curious thing, in this collaboration, is that the guitarbass-drums power trio never goes out of their track to meet Brotzmann half way and their guest doesn’t try any compromise to approach them. Putting it very simply: it wasn’t necessary. Listening to this music, we finally discover that there’s not much separating rock and jazz, at least when dealing with factors like jamming, exploring sound and having a cosmic understanding of creative freedom. Final result: this is one of the discographic pearls of the year 2016.