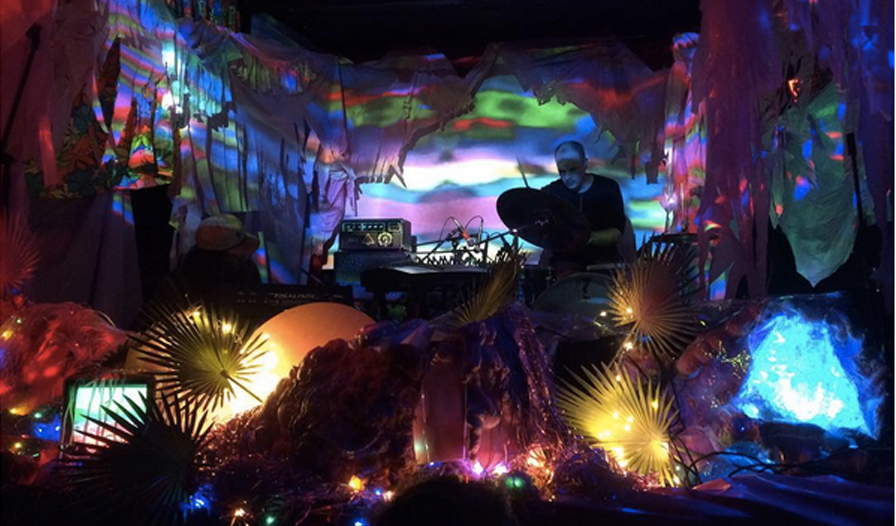 Side A + B
Exegesis

The name Fake Humans for the duo (yes, it’s a duo, even though sometimes it seems an entire orchestra) formed by Colin Fisher and Carl Didur may really be the most appropriate one, considering that any atempts to define the music they play and even to list their instruments are inhuman tasks. Usually, they’re presented as a “spiritual free jazz” project, pointing you immediately to a Pharoah Sanders or an Alice Coltrane reference, but if you may recognize somewhere the saxophone of the first and the harp of the second, the music takes you directly to something very far from jazz. Is it space rock? Exotica? We’re never sure, and it doesn’t matter. The same way we’re never sure if we just heard a guzheng,a flute, a bass guitar, an analogue synthesizer, a drumkit or some phantomization of those instruments by way of magnetic tapes, in a sort of figuration of musique concr?te, if something like that can exist considering music as the only non-representative art. Once again, you won’t care. By then, you’re imersed in a sound world that becomes addictive. The right sound world to honor the journals written by Philip K. Dick which inspired this record and gave its title, “Exegesis”. You’re on another planet now, in the middle of a strange forest where human names like “jazz” or “exotica” mean nothing, and where a monkey can be a bird and a flute something else. Sap maybe, dripping from the giant trees?